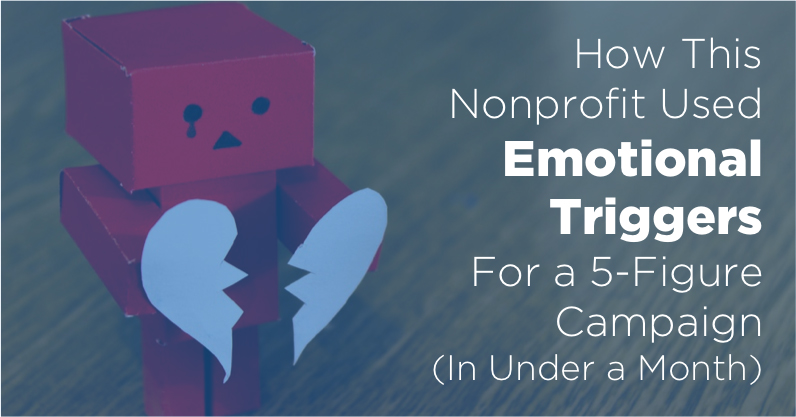 Want your next fundraising campaign to be a success?

Whether online, at a gala, or delivered through a street canvasser, it’s the most important thing a nonprofit can do to raise funds.

Emotions are the #1 driver of actions. That means sharing AND donating.

In everything you do in a campaign, your first priority should be eliciting an emotional response from your audience. And the research shows that high arousal emotions, positive and negative, get the biggest response.

So what kind of emotion should you target?

You could make people mad.

You could make people happy.

Or you could make people sad. Tug on their heartstrings a bit.

I’m here to make the case for a tear-jerker campaign.

Sometimes, a hit “right in the feels” is exactly what we need to hear to force us to open our hearts and wallets and contribute.

But it’s a delicate balance. Going the tear-jerker route can quickly start to feel overly “preachy” or like a guilt trip to your donor. That’s not what we’re going for.

You must inject just the right amount of heartbreak, urgency, and hope to pull it off.

I think the best way to do that is by looking at a successful example of a nonprofit that knows how to get an emotional response and breaking down exactly what makes it so effective.

Attendees of our webinars know that I’m more than a little obsessed with the team at Clearwater Marine Aquarium. They’re just so damn good at launching campaigns to their online audience. They seem to crush it every time!

The reason they’ve been successful is that they’ve cultivated a strong relationship with their audience. They know exactly what motivates them and how to trigger action.

And they know exactly how to make them cry.

Clearwater Marine Aquarium (CMA) runs a rescue operation for the highly endangered sea turtles off of Florida’s coast. Sadly, snaps of cold weather can wreak havoc on the turtles, killing off hundreds of these little guys and causing all sorts of health issues.

The rescue team at CMA sprang into action to save as many turtles as possible, creating a need for resources.

Enter the development team at CMA, which sprang into action to get the rescue team the funding they needed to make it happen.

The results? With 18 days left to go in the campaign, they’ve raised 126% of their goal (and counting).

Let’s break down the elements of this campaign that made it a) a total tear-jerker and b) highly successful.

I’m sure there is a litany of complicated biology and veterinary medicine behind turtle cold stun. But guess what?

Your audience doesn’t understand it, and they don’t care. They don’t need to. They just need to know what the problem is in the simplest terms.

Essentially, you need to explain the need as if you were describing it to a 3-year-old.

And that’s exactly what CMA does in their video:

In a minute and twenty seconds, they tell me:

That’s it. They don’t need to explain how the cold weather affects them or what they do to rescue them. Just those 4 basic facts.

Step 2: Create a sense of urgency

The problem many people run into with online fundraising is the “I’ll get to it later” phenomenon. Let’s call it I.G.T.I.L.

When people see a campaign come across their timeline on Facebook, even if it moves them, they’ll often say “Wow, that’s awful. I need to donate to that…later tonight.”

That’s why it’s so important to create urgency. No, you can’t wait until later. We need your help ASAP!

CMA does this in a few ways in their campaign.

First, the video starts with this line:

Do you see that? Reporting live. This subtle line makes the video feel like an urgent news report. It’s a signal to our brains to pay attention; this is big.

Next, Abby communicates the scope of the problem. She tells viewers how many turtles they’ve taken in during the past week. She emphasizes that a second wave of turtles has just come in.

Even without any prior context to the aquarium and their typical rescue volume, I can just sense from her tone and wording (“wave of intakes”) that these numbers are big.

The page copy shows me exactly how urgent the financial need is as well:

Some quick air math shows me that this wave of turtles coming in is going to cost a lot of cash.

Step 3: Keep your audience engaged with your video

The internet at large has a short attention span. Audiences won’t stick around for a lengthy explanation from your field workers. They need to see the need, not hear it.

CMA does a wonderful job of visually communicating needs in their video. This is KEY because our brains process visual information 60,000 times faster than written information.

First, I can see from Abby’s face that this is a serious problem:

Paired with the somber music, the mood is immediately set. This is so key; I can’t stress it enough: NAIL YOUR EMOTIONAL CUEING.

The video also keeps moving. CMA keeps the audio of Abby talking to the viewer but cuts to footage of the rescue team working with turtles. This is important for two reasons:

Seeing the turtles being cared for is vital. Don’t waste your time telling me about it, just show me! These shots also serve to drive home the emotion as well. You can see that these turtles need help. It’s visible. Their faces show so much expression that it grabs you by the heart.

Personally, I think the most powerful shot in the whole video is the little boy looking at the turtle being cared for:

Besides the shots of the turtles getting their shells cleaned (heart-melter), CMA uses multiple angles of Abby talking:

The variety of shots keeps our brains engaged, watching, and listening.

Best of all? This is super simple to pull off. You can even do it with your iPhone! First, shoot your straight-on shot of your speaker all the way through. Then have your speaker do it again, but film them from a different angle. Simple video editing programs like iMovie (which comes with your iPhone!) allow you to separate the audio from the video so that you can insert other angles and shots but keep the same audio going throughout.

Remember what I said about the I.G.T.I.L. phenomenon? Another key way to avoid that is by making your call to action simple, fast, and memorable.

Most of the time, people will come to your campaign page via a direct link in an email or social media update. But that’s not always true.

Maybe a supporter shared the direct link to your video instead of the campaign page.

Maybe you’re handing out flyers on the street corner.

Whatever the case might be, people need to be able to quickly and easily find the campaign. That way, if you do get some I.G.T.I.L. phenomenon happening, at least they know where to go to when they have time to donate later.

Which one of these is easier to remember?

We call this a “vanity URL,” and they’re a smart way to make it easier to find your campaign. You can typically buy a URL for $8 – $12 for an entire year. Services like GoDaddy.com make it super easy to redirect these URLs to whatever site you want.

Now, certain high-demand URLs will be quite a bit more expensive. No worries, just tweak it until you find one that’s cheap. Maybe CoatDrive.org is being sold for $1,000. So try NYCCoatDrive.org instead!

Clearwater Marine Aquarium did something similar to this, albeit slightly different. They used a special link from their main website so visitors could find the campaign by visiting SeeWinter.com/OperationColdStun. But the idea is still the same: their supporters already know their website, and all they have to do is tag the very memorable name of the campaign at the end.

Equally important, the URL is prominently displayed several times in the video!

One of the worst things you can do, especially with an emotional campaign, is to blast your campaign once and then forget about it.

You need to give multiple updates to your supporters! This means sending them back to the campaign page three, four, maybe even five times!

Not only should you give them updates on the campaign’s progress, but you also need to update them on the causes’ progress! How cruel is it to break someone’s heart and tell them a sad story about a big need in the world, then never give them any kind of uplifting news?

CMA does this masterfully by sending along a simple video update about one of their turtles, BB:

Now people who have already donated can see how their money was spent, and those who haven’t donated (I.G.T.I.L) can see that CMA is actually doing something about this problem!

If you’ve ever uttered the words…

“We could never create a campaign like that, we don’t have the budget.”

…then this part is for you.

Wanna know the not-so-secret secret to create a wildly successful fundraising campaign? Alright, here it is:

It’s not about production value or the resources you have. It’s about the emotions you elicit.

People confuse production quality with emotional quality all the time.

What I mean by that is this: they see a video or campaign that resonates with them, and they think the reason for this connection is a high production value (i.e., expensive cameras, actors, etc.).

But it’s not the camera that made the video effective. It’s the emotions the video/campaign elicits.

It’s quite a silly thing to confuse these two ideas.

Do you think Stephen King obsesses over what kind of paper he will write his next novel on? NO! He’s worried about how he’s going to scare the crap out of you!

Do you think Martin Luther King, Jr. agonized over what kind of microphone would be set up on his podium before speeches? NO! He was focusing on how to move people to take action!

Let’s not forget that plenty of very expensive projects with big-name talent were critical flops. And plenty of cheap movies with no-name actors have achieved cult status.

Don’t let a lack of resources serve as an excuse for poor storytelling. The beautiful thing about the technology we have today is that it allows anyone to create high-production content and get it seen by a nearly unlimited audience.

But in order for that to happen, you must…

No matter what kind of emotional appeal you choose for a campaign, it’s vital that you absolutely nail it. Without that emotional tug, your campaign will have a hard time getting off the ground.

Obsess over it. Write it and rewrite it. Show it to others and get their feedback. Edit and simplify it until it’s simple, clear, and powerful.

This is what you should be spending your time and energy on, not worrying about the right camera, microphone, or the right actors, or whatever.

Hit your supporters in the heart, and they’ll support your campaign.